Henryk Demanet, a passionate young man of the canine world who lived for his hobby despite having a job, decided one day to start a project, at the beginning It wasn’t for making money It was only for himself. One morning from his garage Henryk began to make a suit against bites, because at that time the dog training suits did not meet Henryk’s expectations in all aspects. Henryk saw the need to create clothing against bites that felt natural and easy to move, with great protection and great design, so that same year from his garage he drew his first sketch that once ready made it happen, he created the first Demanet suit and so in turn was born Demanet Costumes. 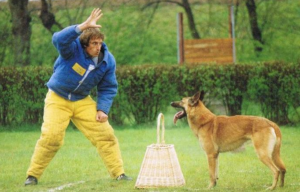 Time later due to the approval of various canine clubs and great leaders in the world of canine training, Henryk began to devote all his time in the production of more Demanet suits but since the demand was gradually increasing, he joined forces with his faithful companion Colette Martinez ep. Demanet and officially founded Demanet Costumes.

After 15 years in France and in search of new opportunities Henryk and Colette decide to move their ideas and their company to the Spanish market. Once consolidated in the new market and with a lot of experience in the international sector behind them they decide that it is time to do a face lift to Demanet Costumes. Which led to the foundation of Demanet International S.L.

Because of the imminent retirement of Henryk and Colette the countdown for Demanet International Evolution begins.

Hervé Mavuanga has always used the DEMANET brand. Beyond a history of sponsorship, it is an exchange of values and vision of the “canine” that has always brought Hervé to DEMANET.

And it is at this precise moment in which two people appear on the scene who will change everything. People with values that share the same passion, with great ideas and a future for Demanet. Julie Laurence Nicole Garnier ep. Mavuanga and Hervé Mavuanga who saw the opportunity, seized it and currently continue with the legacy of Demanet.

Any cookies that may not be particularly necessary for the website to function and is used specifically to collect user personal data via analytics, ads, other embedded contents are termed as non-necessary cookies. It is mandatory to procure user consent prior to running these cookies on your website.